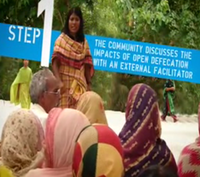 Screenshot from the movie Ten steps to total sanitation, produced by WaterAid. 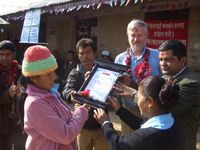 Community members from a small village in Nepal receive an award for achieving the “open defecation free status” after a successful CLTS Campaign.
Photo: SSWM

'Total Sanitation' refers to 100% sanitation coverage in a target area, usually through a combination of awareness raising and affordable sanitation options.

There are two important realizations which are at the center of the Community-Led Total Sanitation approach. The first is that merely providing toilets does not guarantee their use, and does not automatically result in improved sanitation behaviour. Projects that started with prescribed high sanitation standards and subsidies have often led do uneven adoption, problems with sustainability, and partial use. Using subsidies as an incentive also can lead to a culture of dependence on subsidies.

The second realization is that as long as even a minority of people continues to practice open defecation, everyone in the community is at risk of disease. Individual hygiene can affect the health of a whole community.

Community-Led Total Sanitation, if successful, triggers the community's desire to change and stimulates them to act. This leads to better ownership of the solutions, and greater sustainablity.

Description of the Approach

Community-Led Total Sanitation can be very effective in achieving better sanitation and hygiene behaviour. However, the uptake of the approach can be difficult, for example because the shift away from subsidies sometimes requires a different mindset. Good management and support are needed for organizations that support the communities. The approach has both been used by small NGO programmes and by large scale governmental programmes. In some cases, problems with monitoring, mediation and the supply chain exist, and it is unclear which mix of approaches is most effective.

Community-Led Total Sanitation can be a very good starting point for other community action activities, as it mobilizes the community towards common action. As sanitation interventions have immediate health benefits, this demonstrates the power of collective action, which builds confidence in the community to undertake other developmental projects as well.

Community-Led Total Sanitation was first pioneered in Bangladesh in 1999 by Kamal Kar (see external links for a list of his articles on the subject), and since then has been widely adopted in that country in in others, particularly in South and Southeast Asia. The approach is also being used in Africa, notably in Uganda and Zambia.2