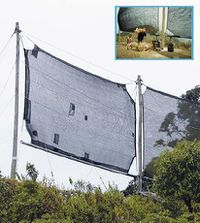 Fog water collection uses large polypropylene mesh nets on ridges to capture water-loaded fog, which forms in humid months in mountainous regions or coastal areas. The meshes are erected perpendicular to the prevailing wind. The mesh captures small water droplets (1 to 40 μm), which trickle into a collection trough or gutter and drain into a series of tanks. Trees and grass intercept fog in a similar way.

Intercepted fog is commonly of a good quality, but may be affected by air pollution, dirt on roofs or rust on metal sheets. If measures are taken to prevent the first polluted flush entering storage tanks, water can be fit for drinking and other domestic use with little or no treatment.

Fog collection is most suitable for locations with frequent fog periods. Upland areas where fog is produced by the advection of clouds over the terrain or where clouds are forced to rise over mountains are most suitable, in areas of prevailing winds between 3 - 12 m/s and with no obstructions to wind flow. Fog formed on the ocean surface, or nocturnal radiation fogs in low-lying areas normally lack sufficient liquid water content or sufficient wind speeds for substantial water collection. Examine meteorological records and consult local people about their observations.

A number of meteorological and geographic considerations are important in choosing a site: predominant wind direction (persistent winds from one direction are ideal), clouds forming below the maximum terrain height, sufficient space for the fog collectors, and no major terrain obstacles. In the case of coastal cloud decks, the mountain range should be within 5 or 10 km of the coast.

If sufficient water is collected, vegetation or crops can also be planted and sustained. Once vegetation is established, it can sustain itself by catching the fog droplets directly.

Resilience to changes in the environment

Changes in sea surface or atmospheric temperatures can change the height of cloud bases or influence the extent of the cloud decks. Therefore be sure to site the collection nets in the middle of the most dense region of fog. If climate change causes the cloud patterns to move, the nets will need to be moved to maximise the area of greatest fog density. Coastal and upland forests in temperate and tropical regions, where fog is greatest, will be most affected.

When fog collection is used for irrigation to increase forested areas or vegetation coverage, it can help to counteract the desertification process.

Once a polypropylene net is obtained, use it correctly in a double layer. This is normally either polypropylene or polyethylene, u/v protected, with 35% shade coefficient, Raschel mesh weave, and a 1mm fibre size. Efficiency increases with smaller mesh sizes and fibre width.

Space the nets at 5 metre intervals along the contour (horizontally) and at a distance equal or greater to 60 times the fog collector height in an uphill/downhill direction. This allows for the most efficient collection of fog. It also means that wind damage is less likely compared with collectors that are joined together. In general, these flat units are good for wind speeds up to 20m/s. Cables should be protected within garden hose to prevent them causing erosion of the structure.

Typical water production rates from a fog collector range from 150 to 750 litres per day but some schemes are capable of producing 2,000 to 5,000 litres per day. Efficiency of collection improves with larger fog droplets, higher wind speeds, and narrower collection fibers / mesh width. In addition, the mesh should have good drainage characteristics. In high winds, nets would normally be taken down as part of normal operation and maintenance.

A polypropylene mesh has a lifetime of about ten years. In Nepal, operation and maintenance is difficult due to the unavailability of spare parts (mainly polypropylene mesh). Hence keeping stock of mesh and other spare parts is highly recommended. In high winds, nets would normally be taken down as part of normal operation and maintenance. Otherwise where fog collectors are remotely located, different designs are being researched which may provide increased robustness.

The costs vary depending on the size of the fog catchers, quality of and access to the materials, labour, and location of the site. Small fog collectors cost between US$75 and US$200 each to build. Large 40-m² fog collectors cost between US$1,000 and US$1,500 and can last for up to ten years. A village project producing about 2,000 litres of water per day will cost about US$15,000 (FogQuest, 2011). Multiple-unit systems have the advantage of a lower cost per unit of water produced, and the number of panels in use can be changed as climatic conditions and demand for water vary (UNEP, 1997). Community participation will help to reduce the labour cost of building the fog harvesting system.

According to the International Development Research Centre (1995), in addition to Chile, Peru, and Ecuador, the areas with the most potential to benefit include the Atlantic coast of southern Africa (Angola, Namibia), South Africa, Cape Verde, China, Eastern Yemen, Oman, Mexico, Kenya, and Sri Lanka.

The largest site in Guatemala produces 7,000 litres per day during the dry season. In Nepal, cost per m2 was $60, which included all materials for nets and reservoirs, plus labour.