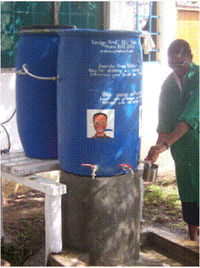 The EnDeCo Institutional Defluoridator. It can be made at any desired capacity, normally in the range >20 m3 for a raw water fluoride of 5 mg/L. Photo: De-fluoride.net. 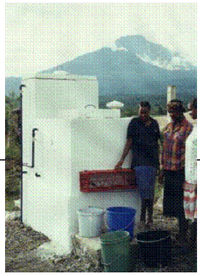 A Contact Precipitation Unit set up as a demonstration plant and run for a couple of years. Since, it has been operating as a simple Bone Char community plant.
Photo: De-fluoride.net.

High levels of fluoride in groundwater have been reported parts of in Ethiopia, Malawi, Kenya and Tanzania and can lead to health problems including dental fluorosis, osteosclerosis, thyroid problems, growth retardation and kidney failure. A WHO report shows excessive fluoride intake (3-6 mg/L) can lead to severe and permanent bone and joint deformations of skeletal fluorosis. The consumption of drinking water with higher fluoride concentrations (10 mg/L) can lead to crippling fluorosis, which causes the hardening and calcifying of the bones.

Treatment at the household level has several advantages over treatment at the community level. Costs are lower, as defluoridation can be restricted to the demand for cooking and drinking which is usually less than the total water demand, which gives people a sense of ownership. This treatment option may be feasible in less developed countries especially in rural areas, where settlements are scattered.

Treatment of fluoride contaminated water at the source is carried out on a large scale under the supervision of skilled personnel, without direct involvement of the users, and where the affordability of treatment is taken for granted. In such cases the method of treatment is well-established and well-controlled. However, it requires major input of resources and may have serious limitations or disadvantages in less-developed countries; especially in rural areas where the settlements are scattered. This is especially adopted in developed countries. 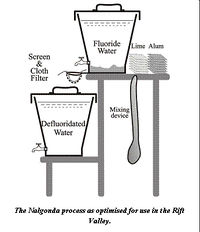 There are several methods which have been developed to reduce fluoride from contaminated water, such as adsorption, ion exchange, precipitation, electrodialysis and reverse osmosis. These methods have rarely been implemented in developing countries, except in some areas, due to insufficient removal efficiency, unaffordable costs, and complicated operation and maintenance (particularly for rural populations).

The most common defluoridation methods used in developing countries at present are sorption on activated alumina, co-precipitation with aluminium hydroxide (known as the Nalgonda Technique) and sorption on bone char. 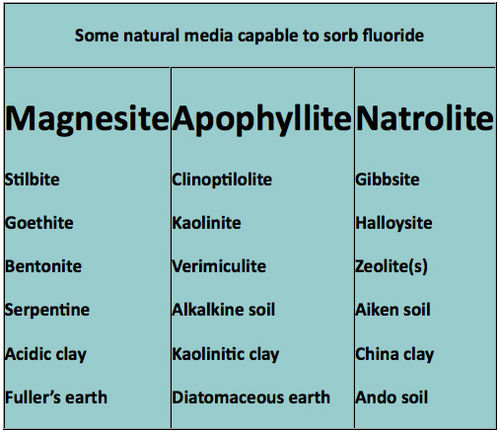 In the Rift Valley regions of Ethiopia where there is a high fluoride concentration, the settlement of the people in the rural areas is scattered. Therefore to combat the problem of fluorosis, a household treatment system is a reasonable approach. Thus it is necessary to develop a household-scale defluoridation unit that can be applicable in these areas.