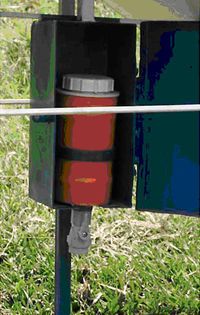 chlorine dispenser in its fixed stand

In many rural areas where infrastructure is poor, finding solutions for contaminated drinking water is difficult. Dilute chlorine solution is often sold in bottles to be used at a household level to disinfect water. For more information about water disinfection using chlorine see Chlorine (Sodium Hypochlorite) The costs of packaging and distributing these bottles however are very high. Because of this, chlorine disinfection is unaffordable for most rural households, even though the cost of the actual chlorine is only around 5% of the price of the bottle. It is much more efficient for the chlorine to be bought in bulk and placed in dispensers at local water sources, increasing the intake of chlorine and so the average drinking water quality.

Chlorine has been used to disinfect drinking water for over a century in central pipelines and in individual households. However since the costs of this are extremely high and not all communities have the necessary infrastructure, Innovations for Poverty Action (IPA) developed chlorine dispensers to be installed at communal water points.

It has so far only been installed in Kenya, however IPA is planning to scale up the program. The system has the potential to work on a global scale as a solution to waterborne diseases. Studies show it improves health at a cost of US$20 per DALY (Disability Adjusted Life Year). Approximately 100$ per DALY is considered very cost effective. 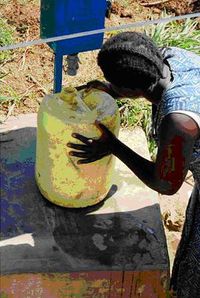 Chlorine dispenser in use
A dispenser of dilute chlorine solution is installed on a fixed stand in a lockable box. Below the box is a dosing valve so users turn a knob and a specific dose of chlorine is released. This dose is appropriate to treat the amount of water usually collected. As the water is transported back home, there is contact time for the chlorine to act.

The dispensers need to be refilled regularly. Not much maintenance is required since the dispensers are made of plastic.

The total costs were estimated at $0.15 per person per year. This is about a quarter of the cost of retailing chlorine.

A study showed that 6 months after installation of the dispensers 61% of households disinfected water using chlorine, compared to 8% before installation. More dispensers will soon be installed, at various locations such as schools, springs and urban sites.

Pilot programs are also being organised by NGOs in Swaziland, Ethiopia, and Bangladesh.